I have always prided myself on the fact that I can hide my illness; hide how much pain I am in! I like that fact that strangers who pass me in the street see me as a “normal, healthy person,” just like everyone else. I like the fact that I am able to put on a brave face and appear happy even when I am really struggling! I like that by putting on a brace face it stops others from worrying about me too much! But there are also a couple of downsides to this. 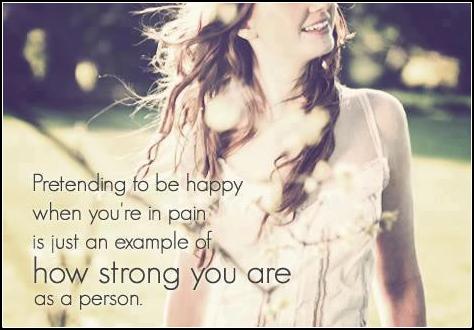 Last summer I took on a physical job working as teaching assistant in a special needs school for a few months before I moved to down to Cornwall. My role was incredibly hard work; I was on my feet most of the day, chasing little ones around the classroom and playground, changing nappies, bending, stretching etc. As you can imagine, after a short time, the pain in my legs, hips and back intensified and flared up repeatedly, and I had to have time off. My employers knew about my condition but I hadn’t really sat down with them and properly explained my limitations before I started as I didn’t realise how physical the job would be. After a while it got too much, I couldn’t pretend anymore that I was fine. I had a meeting with my manager about reasonable adjustments, and, once they were aware of my struggles, I was given a special chair, allowed to sit down whenever I had a chance, could opt out of more strenuous activities etc. As much as it pained me to tell others when I was struggling as I always want to appear strong and invincible, it helped make my job easier! But, because my condition is invisible, I always worried that my co-workers wouldn’t believe me and I was constantly worrying about what they were thinking; did they think I was lazy as I looked fine from the outside? Would they think less of me if I sat out of this activity? etc. So I would always push myself to do more than I should have to make sure others thought I was working hard. Worrying about what others think of you and your condition is a big downside to having an invisible illness.

One of the most challenging parts of having an invisible illness is the mere fact that it is invisible. A person with an invisible illness often looks just like every other person. They look “normal” on the outside, while on the inside, they are often fighting for their life. But, you would never know this just by looking at them. Another example of when my worries/insecurities of what other people think have stopped me from putting my health first is when I have travelled on public transport. On holiday in Italy last year for example, me and Paddy were getting a very busy bus home from the beach one day. He managed to nab me a seat while lots of people were cramming on and having to stand. I was so grateful as there is no way I could stand up for the half an hour ride home – my legs would flare up big time for days after and I’d be stuck in bed on holiday! A pregnant lady then got on and asked me if she could sit down. I didn’t hesitate to get up and give her my seat, even though I was more than likely going to suffer a lot more than her if I had to stand up. I ended up sitting on the dirty floor of the bus with everyone staring at me from up above. So why didn’t I say no, I have a disability?! Because I didn’t think she would believe me. At that point I disliked the fact that my illness was invisible. I was in so much pain on the inside, why couldn’t it show on the outside just this once?! If I told her I was ill I thought she would immediately have judged me on whether she thought I looked ‘ill enough’ based on my physical appearance. I might really struggle to walk more than 50 metres before I have to sit down and I am in constant pain, but at that moment I felt like a fraud. 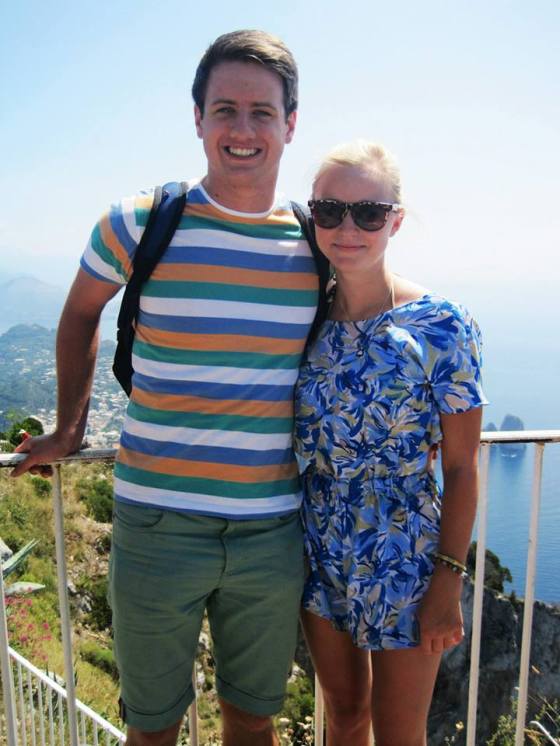 Me and Paddy on holiday last year! Even though I was in a lot of pain, I certainly didn’t look sick!

If you are reading this and have a chronic illness, I am certain you have heard the phrase “but you don’t look sick,” or “you look well” many times. I’m now referring to interactions with friends and family. Those friends and family members who you aren’t as close to as say your mum or dad, boyfriend or best friend. Those friends and family members that you see every once in a while who don’t really know the full extent of your illnesses. When they pop round or see a picture you’ve uploaded on Facebook of you out and about, and say how well you look or assume you are better, it’s frustrating. They don’t realise that in order to go out that day, you will probably have had to be in bed for several days before, that you need help with certain things like showering, that brushing your hair is exhausting etc etc. I know that those people are only trying to be nice and it’s credit to me that I am strong enough to put on a brave face, but I can’t help feeling really misunderstood sometimes. I am however so so lucky to have very understanding and supportive friends, close family members and a boyfriend who have always been able to look beyond my physical appearance and see how much I am struggling. They are able to look hard enough to see what nobody else can.

I used to see a pain psychologist who helped me to deal with my insecurities surrounding my invisible illness. She taught me to not second guess what others were thinking. Quite often, she said, they won’t be thinking anything close to what you think they are thinking, and… even if they are, so what?? It’s unlikely you will see those strangers on the bus again, or those co-workers at a summer Job, so why does it matter what they think of you? Why does it matter if your friends and family think you are getting better? I have people in my life that truly understand and that is amazing. She taught me to try and take care of myself by not allowing their naivety make me question myself. The problem lies with their ignorance about chronic illness; it does not lie with me. I know I am sick, and that should be good enough for me. My god it takes practice to try and think this way, but it’s worth the effort. I am slowly getting better at this

Since January my illness has become more visible as I have developed new symptoms on top on my chronic pain condition, including migraines, insomnia, breathlessness, tachycardia, difficulty concentrating, memory problems, extreme fatigue, dizziness and more. These have got progressively worse to the point where I have to use a wheelchair whenever I go out. Whatsmore I actually look a bit ill now – and I can’t even try to hide it with make-up and nice hair as putting make up on and doing my hair requires too much concentration and is just exhausting so I avoid it completely now. My breathing is also very laboured and I get very out of breath when talking which is also visible. And although, the general public, friends and family can now see some of my struggle (by no means all of it though as a lot of my symptoms are invisible), I would much rather be able to hide my illness again!! I would rather look normal and be misunderstood sometimes than have to use a chair and look ill. Yes, the lack of understanding about my deceiving healthy looks was annoying at times, but I would much rather go back to that! So yes… there are downsides to the invisibility but there are also lots of positives! Who would choose to look ill over looking well and glamourous…not me!! 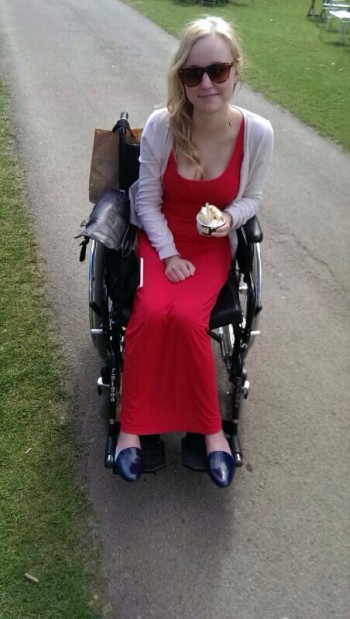 Me in the wheelchair which makes my illness much more visible!