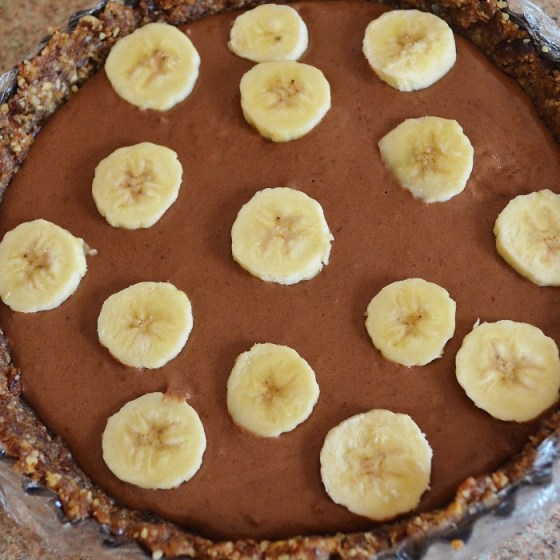 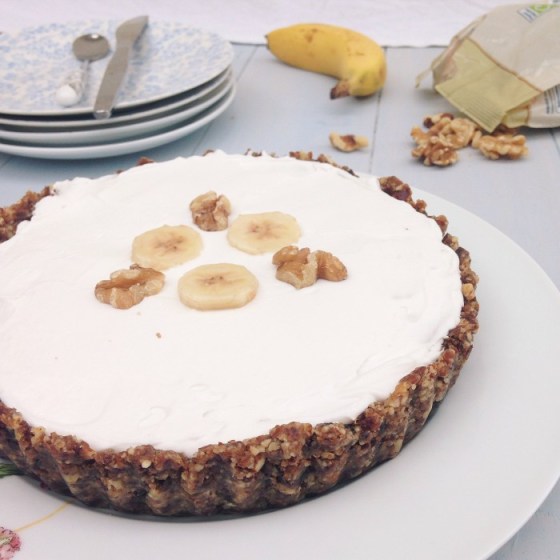 As you probably know by now if you’ve been following my recipe posts, I love my puddings! Before I cut out dairy completely a month or so ago now, I was quite apprehensive about what I could have to satisfy my real sweet cravings aside from my latest obsession of nana ice cream! But the apprehension quickly subsided after making the Secret Squirrel’s raw vegan blackberry tart last week which was very scrummy. At the weekend I was craving a big slab of banoffee pie, but not the loaded with whipped cream variety of course. So I set out to make a vegan version that was just as good. And boy was it!! In fact it was better! The cream is the best bit as it has hint of coconut and honey!! Nom nom!

I found a recipe by the Rawsome Vegan Life and adapted it to suit my taste and what we had in the cupboards. To my surprise the pie made everyone very happy! Even my brother who is a huge meat eater and chocolate Oreos kind of guy, said it was delicious. And my auntie who’s a chef said it’s the best thing I’ve made so far!

To make the crust, process the nuts in a food processor until they become crumbs and add the rest of the crust ingredients. Process until it all sticks together when you press it between your fingers. Press into a pie dish and put in the freezer until the filling is ready to be added.

To make the filling, blend all the ingredients until smooth then let it set and thicken in the fridge for 30 minutes. Remove the crust from the freezer and spoon the filling into it. Leave it to set in the fridge while you make the coconut cream.

To make the coconut whipped cream, spoon the coconut milk into a mixing bowl with the honey and vanilla essence and whisk until it’s thick and fluffy! I used an electric whisk as I have very weak arms due to my illness. Remove the pie from the fridge. Slice the remaining banana and place the slices on top of the filling. Spread the whipped cream all over your pie with a knife. Put it into the fridge for a few hours and then enjoy!

Really hope you like this recipe as much as me and my family did! Do let me know if you have a go at making it!